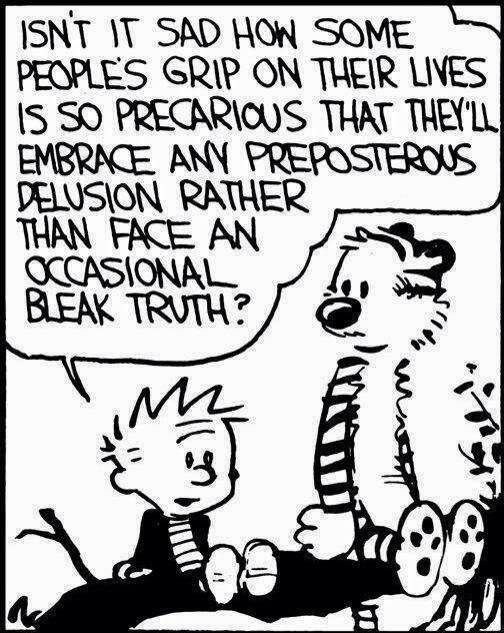 Now repeat after me: Even if our corpses end up in the tummies of worms and bugs and bacteria, we don't really die. Actually we live forever after we've breathed our last. And even without eyes, ears, brains, and not a single atom, we can see, think, feel, converse, sing praises and suck up to the Big Honcho. Yes, folks, this is no delusion. I'm positive it's true. Because as Tertullian said, I so totally believe because it is so damn friggin absurd and insane.
Posted by Edwardson at 11:17 PM No comments: Links to this post

It's come to my attention that a widow who lost her husband to chronic illness almost a year ago is still reeling and grieving to the point that her health has now suffered. That to me doesn't make sense. And that's because the couple had been very devoutly religious and had been leaders in their church. Isn't he now in a so-called better place? Isn't he now free from the fetters of the mortal coil that only caused him physical torment in the last years of his earthly life? Isn't it a fact in their worldview that she will, sooner or later, be joining him, and they would be together forever living in utter bliss? Hence, her inability to let go makes no sense. If she really believes all the religious drivel then letting go wouldn't be an issue at all. In fact, she would've rejoiced at his departure and continue reveling at his good fortune. Therefore, it must be that her psyche in large part doesn't buy into the theological, supernatural, afterlife bullshit.

In this regard nonbelievers are in a superior position, mental health wise. They have no belief in any hereafter. To them physical, biological death is the end of it all. Consciousness, the ego, the I, personality, everything we associate with the vivacity and individuality of the living person are co-terminus with the body (brain included). Do we therefore not grieve? Of course we do. But we are untrammeled by delusions which try to mitigate the full impact of complete physical loss of the other. We know and accept the fact that the inevitable is coming. Either we will succumb first or our loved ones will go before us. Loss--complete and irrevocable--is built into the worldview that is aware of and accepts the reality of life and the reality of eventual nonbeing.
Posted by Edwardson at 11:10 PM No comments: Links to this post

Snowmen not really banned in Saudi

A prominent religious scholar in Saudi Arabia has reportedly issued a fatwa against building snowmen in the kingdom, stating the practice is not acceptable to Islam. [The Telegraph]

I have just come out of a closed-door meeting with top-level imams to discuss this most pressing and earthshaking issue, and the consensus is that this cleric has erred in his reading of scriptures.

Oh, and before I forget, it was unanimously agreed that snow-goats are a must when making snowmen. Ice-Muslims need mates too you know.
Posted by Edwardson at 10:10 PM No comments: Links to this post

Religion can explain everything away


They said I must pray for my incurable stage 4 cancer to go away. Thus I carefully composed a request, an entreaty containing details of my condition and the outcome I desired, and read it out loud. But they vigorously shook their heads at my ignorance and said I must first have faith, that I must become a true believer! So I converted, became a devotee and prayed throughout the day, every day. Alas my health did not improve and they chastised me for my lack of faith and urged me to deepen my belief. Certain of a miracle I continued my daily petitions, but then succumbed not long after. And when they came to my wake they commiserated with my wife and children, assuring them that everything that happened--the disease and my months of abject suffering--was God's will, that it was His way of beckoning me back home, and that I was at last in a much, much better place.

The Chinese ideogram for mouth is a square: "口". And old folks like to say that you can turn this character left or right or upside down and you'll still end up with the same thing--meaning, in one sense, that you can talk your way out anything if you're savvy enough. So it is with religion. Everything--even evil--can be rationalized and explained away with twisted theological gibberish.
Posted by Edwardson at 10:01 PM No comments: Links to this post

Proportioning our respect for beliefs

Therefore, respecting beliefs indiscriminately is patently unethical. To respect beliefs blindly and equally is to be party to evils that can arise from them. Just as we are ethically bound to proportion our belief according to the quality and amount of evidence, so we are ethically bound to proportion our respect for beliefs of others according to the truthfulness of those beliefs.
Posted by Edwardson at 9:55 PM No comments: Links to this post

Which healer do you go to?

Is anyone among you sick? Then he must call for the elders of the church and they are to pray over him, anointing him with oil in the name of the Lord; and the prayer offered in faith will restore the one who is sick. (James 5:14-15)

When it comes to health only two persons have integrity: the nonbeliever who doesn't ask mute, unseen, superbeings for help and instead visits doctors when they're ill or are injured, and the fundie who will not seek nor accept any kind of medical help and instead do only what the verse from the epistle above enjoins them to do. One has faith (i.e., confidence based on track record and evidence) in medical science; the other has faith (i.e., blind, unjustified trust) in the teachings of their tradition. Both are uncompromising.

The rest just want to cover all the bases, are insurance-loving and risk-averse. They rush to the hospital and fall on their knees ... and then pile on alternative and complementary quackery just to be triply sure.
Posted by Edwardson at 9:49 AM No comments: Links to this post

An all-powerful and all-knowing being created the universe so that by design he will/must:

1. kill by drowning every living thing on earth (save for a few)
2. affirm the institution of slavery and bondage
3. tyrannize his creation and promise to condemn unbelievers to eternal pain and suffering
4. and become flesh and blood and be lashed, whipped, beaten and then impaled.

Posted by Edwardson at 12:08 AM No comments: Links to this post