Click on the image below for the contingency table spreadsheet. When the spreadsheet appears, remember to check out the sheet labeled "Reference." You'll find that tab at the bottom of spreadsheet.

The spreadsheet is set to "view only" which means you can't make changes to it. I definitely am not letting anyone fiddle around with! So I suggest opening a Google spreadsheet of your own on Google Drive and copying my sheet to yours. You can use the contingency table after that. Just don't alter any formulas in the cells unless you know what you're doing.

Numerical values that do need user input are in cells with a bright yellow background. 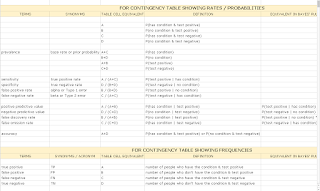 An older contingency table spreadsheet is located here and is used by my blog post on human pregnancy tests and a subsequent follow-up post.
Posted by erebusnyx at 10:07 PM No comments:

The incredible gullibility of beings

It's not just a question for those who're neck-deep in the supernatural, paranormal, or quackery, although these are the most conspicuous areas of gullibility.


[Stephan Lewandowsky at the University of Bristol] explains that our beliefs are embedded in our 'mental models' of the way the world works; each idea is interlinked with our other views. It’s a little like a tightly bound book: once you tear out one page, the others may begin to fray as well. 'You end up with a black hole in your mental representation, and people don’t like it.' To avoid that discomfort, we would often rather cling to the myth before our whole belief system starts unravelling.

Sound familiar? Yep. Religion. It's a worldview dependent on a number of core beliefs linked to one's identity. Shoot down belief in the supernatural and the person goes to pieces. And thus the Great Redoubt against doubt, reason and evidence--truth and intellectual integrity take a back seat (last row in the bus perhaps?) when it comes to emotional/psychological stability.

Because we're such poor thinkers it's imperative that we tap into the 90% of our brain that we don't normally use. That reserve holds the key to becoming good solid thinkers. And it wouldn't hurt at all to help the gray matter along by taking 10,000 mg of Vit C everyday. As anyone who's checked knows, scientific tests have shown that Vit C boosts mental capacity by at least 4000%. In a large multicenter randomized controlled trial half the subjects were asked to add up two 3-digit numbers before before waking up, while those in the other group worked on the math problem right after taking a 10000mg capsule of Vit C. The latter performed way better than the control group, with p < 0.00000001.

Full disclosure: I came across the Ark question mentioned in the BBC article just a month or two ago in one of the cognitive psych books I've been going through. It crashed my neural CPU. Embarrassing failure because it was in a book about such thinking booboos--I should've known better than to let my lazy System 1 be at the helm doing the mental processing. Knowing the power of the dark side (cognitive indolence/miserliness most certainly is) I bet I'm pretty much none the wiser. Fortunately for my ego the Iron Lady question didn't get pass my Central Intelligence Security.
Posted by erebusnyx at 5:32 PM 2 comments: