According to Eduardo Cabantog he's an MD who's served in various state-run hospitals in the Philippines. Some years ago he founded Alliance in Motion (AIM) Global, Inc.--a multi level marketing (MLM) company. He's never looked back since. And if his presentation (see endnote 1) is any gauge, he's actually turned his back on the ethics of being a doctor.

AIM is into food/dietary supplements. But I'm not even going into the efficacy question regarding the items the company is peddling. This blog entry is about a (different) scam Cabantog has been perpetrating during his presentation(s).


Watch the following video begining at around 2:40 (you can see how the older gentlemen eventually fared in Part 8 of the presentation below).

The two men are easily thrown off balance by Cabantog when he performs his drag-the-person-down test. But after taking Alive! supplement (manufactured by Nature's Way) the two subjects become incredibly immovable. Try as he did Cabantog could not get them to budge. Amazing, isn't it? Well, it would be if Cabantog wasn't resorting to outright flim flam. Here's Richard Saunders of Australian Skeptics showing us how to do this party trick (see endnote 2). The reveal begins @5:10.

The direction in which the forces are applied is key. Push/pull a person away from where he's standing and it's easy to throw him off balance. The opposite is also true. Moreover, the lack of any form of blinding ensures that the tester can apply as much or as little force as he wants depending on whether the subject has taken the supplement or not. Similarly, the subject, knowing that's he's taken the supplement and having already been primed by Cabantog's prior presentation on the benefits of the wonder supplement, can apply more or less resistance. The subject--just like a patient--reflexively wants to please the authority figure and to play along specially given the large audience present (yes, there is peer pressure at work). Given how Cabantog has full control of the vectors--the magnitude and direction of the forces he's going to apply--and given how the subjects can more or less be counted on to perform as expected of a good albeit unwitting shill, there is almost no way this trick can go wrong.

Did you see it? Those two segments are merely mirror images of one another. And we know the first is the original because @2:23 to 2:25 we see the label of the lancet (the penlike device for pricking the finger)--the first few letters being "Lan"--flipped horizontally @4:41 to 4:43.

Moreover, if you listen carefully to the audio (best if you don't look at the vid) you'll hear the same one in both the first and second segments (although the first few seconds from the first don't make it to the second; in its place is a short part of the audio downstream, thus resulting in that portion being repeated twice in the second segment). You'll even hear the very same car horn @2:47 and @5:05.

In the first segment, the supposed blood sample taken is one before the subject took Alive! In the second, a blood sample after the supplement was taken. But as we've seen AIM Global merely provided a flipped version of the very same blood sampling. If AIM actually took blood samples from a subject in the audience before and after taking Alive! and if the glass slide showing freely moving RBC is from the same subject, then because they don't have the video clip for the second sampling there is reason to believe AIM is hiding something. Perhaps they don't want to show that they added a substance to the second blood sample (which they didn't to the first) because "Rouleaux and clumping occur when blood is placed under a microscope without first being suspended in proper solutions to control acidity and agglutination." Is AIM going to give us the lame excuse that they forgot to turn on the camera during the second blood sampling or that that video segment got corrupted?


Finally I found the following images in a Facebook album that apparently is open for all Facebook members to see and comment on. They're ads for AIM's latest product C24/7, which apparently is an improved Alive! since instead of just 16,000 "phytonutrients" C24/7 contains 22,000. Given the weight of one capsule and this number of chemicals you can do the math to find out how many micrograms of each there is per cap (assuming AIM isn't pulling our legs--again--with that 22k figure). 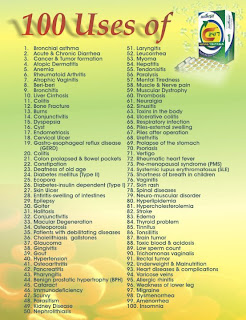 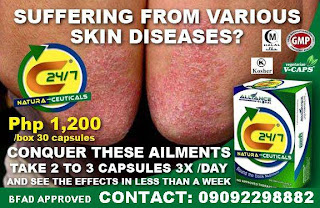 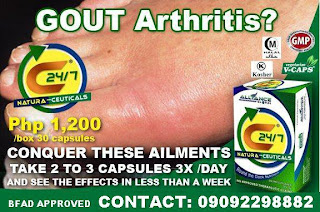 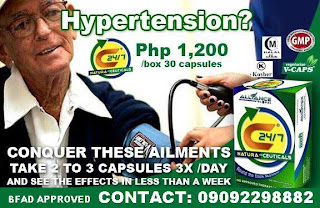 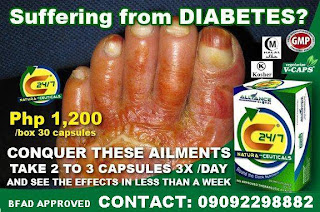 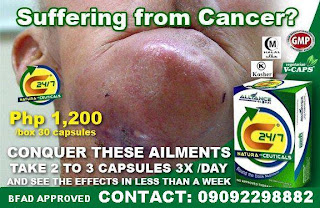 Whether these ads were made by AIM Global or by individuals (re)selling the supplement, I don't know. Since these ads make explicit therapeutic claims, they are in clear violation of the laws of the land (among others, RA 7394 Art.112 and the Department of Health regulations)

2. This trick was also employed by, among others, Power Balance (Australia), which recently had to admit (thanks to the Australian Competition and Consumer Commission) that its wild claims for its rubber bracelet are bogus: 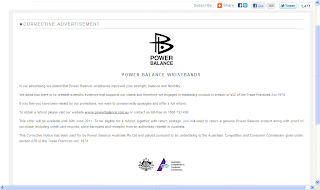 Posted by Edwardson at 5:35 PM

Ed Cabantog uses another trick. He made use of the “Light as a feather, stiff as a board” or “Pig in a Blanket, Stiff as a Board” party trick to fool people that the supplement he peddle works.

He has videos using the trick for the C24/7