A goat per million sheep

It's December again. What I really like about this season is the respite from the oppressive heat, which for some meteorological reason is still, pretty annoyingly, lingering even this late in the year. There's the cool of the season. And then there's the apocryphal birthdate of that Jew Yeshua ben Yosef (or as Xians would probably rather have it, Yeshua ben Yahweh). Yes, it's that time of year again. Talk about trigger for anxiety disorders and this rant.

Well, this year I'm no longer even going to go around wishing people Happy Holidays. I don't celebrate Ramadan, or the birthday of Ganesh, or some Buddhist holy day. And I don't go wishing folks who observe these holidays. So I don't see why I have to bother greeting others for a holiday I don't observe.

But I must admit I've been a traitor by playing the stupid game when greeted by the herd out there who say "Merry Christmas!" And that's because I've for as long as I can remember reacted to that stimuli by bouncing back the same thing. Well, that may be about to change. This year I'm planning on putting an end to being sickeningly hypocritical, and so rather than just echoing that trite greeting I'm trying out various different things (depending on how many tacks I can brainstorm into existence).

Among the suggestions by fellow brights (brought out in the latest Brights newsletter) in response to being accosted by the ejaculation "Merry Christmas," are such things as "And a Bright new year to you." Well, I like that. It's a positive message and doesn't have any explicit antisocialness to it. The problem is of course, How many in that billion-flock of sheep to whom we address it understand what a bright is? How many will hear "bright" as "a person with a naturalistic worldview" and how many will hear "bright" in the ordinary sense of the word? 99.9999% in the latter's favor I suppose. If the idea is for Brights to simply to get a kick out of duping the unsuspecting then I don't see the point. That said, replying to such a greeting via email is another thing. I might very well fire off: "And may you have a Bright new year." I can only hope the recipient checks out the link. The uppercase B ought to help pique their curiosity.

One response that comes to mind is simply "I'm sorry but I don't celebrate that occasion. I'm not a Christian." It's factually true, but I just don't know if I can bring myself to say it. Given the questions that that will elicit, I simply can't give each faith-head I bump into this season a crash course on Atheism 101 and a rundown of why I am not (or no longer am) a believer like them. Now if they can all just gather in one venue, I'd be happy to offer them a primer. Nevertheless, I probably will use a variation of this with salespersons in shops and malls, and the like--not least because it is almost certain these people have been ordered to dump on everyone the perfunctory greeting. Because of the seller-client relationship I doubt they'll ask nosy questions. In fact in such cases I might take the opportunity and follow up the above up with: "Do consider that people who don't share your religious beliefs might not take too kindly to what you're foisting on them" (or something like that in the vernacular). Of course, that's hardly a rational suggestion to them since around 95% of the population is Christian! But at the very least I hope it will be consciousness-raising (as Dawkins likes to put it) for them. It ought to make them aware that what they've taken for granted isn't the whole truth.

As for the old "Happy winter solstice!", let's face it. It's pretty contrived. I certainly don't celebrate solstices nor equinoxes, just as I don't use the Chinese lunar calendar and celebrate the phases of the moon. Be that as it may, by accident I saw a near full moon around 45 degrees from the western horizon at around 2am several days ago. I quickly grabbed my digicam, went outside, set the cam to spot metering mode, zoomed it to its maximum, and snapped a couple of images--without a tripod mind you. The cosmos is beautiful. And we don't have to celebrate in any ritualistic, "periodistic" way the various celestial phenomena to appreciate them. 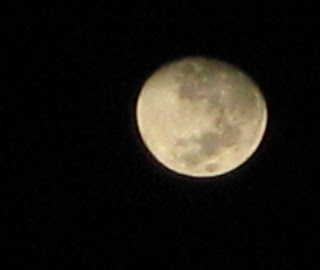 The North Americans and a majority of Europeans are ahead in this area (at least I think they are, relatively), with their consciousness pretty much aware of the multicultural status of their populace. You don't greet Muslims, Jews, Buddhists, Hindus, ... and atheists with "Merry Christmas." That is at the very least a faux pas. You don't presume that people you bump into are necessarily Xians. On the other hand, the near homogeneity of religious affiliation in this country has made such (automatic) consciousness-raising difficult. When throughout your life you've seen and dealt only with sheep, you come to develop a mindset whereby you see and treat every animal you come in contact with as fellow sheep. Well, hopefully, if this goat can muster enough courage I will be initiating some mind-opening and consciousness-raising this season, jarring a couple or so sheep into realizing that there are in fact other species in the world, making them relativize what they've for so long taken for granted, and forcing them to reserve that knee jerk utterance of theirs for those whom they know are in fact fellow sheep. Hopefully.
Posted by Edwardson at 11:57 AM