This is an interesting and encouraging development. It seems that not all (male) Muslims approve of the veil.

The Egyptian minister of religious endowments [Hamdy Zaqzuq] has forbidden his ministry's religious counselors from wearing the face veil, or "niqab," the press reported on Monday.... [Zaqzuq said,] "The niqab is a matter of custom and not the faith -- it has nothing to do with the religion."

What I'd like to know is why there are women choosing (rather than being forced) to wear the niqab, the face veil. What could be their reasons for doing so? Could it be that for some there's an anxiety reducing factor in hiding one's face? I could relate to that (but then donning a paper bag over my head would attract even more stares!). Are some of these women embarrassed of their looks (find themselves homely)? Do some of them get a kick out of going out as masked women? Have some been brought up believing that women should not be seen (in public)? That they are second rate citizens? That it is shameful for them to expose their faces? What are the (various) reasons that drive them to remain hidden/anonymous in public?

And while on the subject of female attire, here's the latest on female Muslim swimwear--the Burqini. 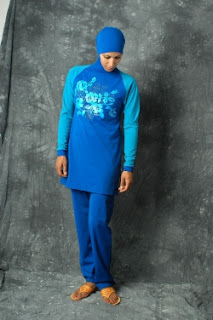 Looks to me that with it women can go jogging and then dive right into the pool.

I'm not into swimming but I bet having such loose clothing is an inefficient way of moving through water.
Posted by Edwardson at 10:38 AM

I am enjoying scrolling down your posts. They are very entertaining. :)

regarding this post: I always wondered too about what was going on behind the veil. I've always had the notion that the years of oppression & being considered second class citizens has just reduced those women to pretty much puppets or robots. That is probably grossly unfair to them. But who's to know? After all they are behind a veil. What ever it is, it's spooky.

Oh BTW, I found you through vjacks blog.