Casimero's Cure Manual for All Diseases

Edwin Casimero maintains the website The Cure Manual whose tagline reads, "Banish Fear from ALL Diseases. All Diseases Curable." Just from that last claim you may already be rolling your eyes. His site provides cures for a variety of illnesses.

Is Casimero a doctor? A scientist perhaps? Apparently, he has no qualification whatsoever in medicine, biology, biochemistry, or anything related to human physiology, metabolism, and disease. Instead he describes himself as a "hobby healer," which simply means healing is a hobby of his.

Nothing wrong with sharing information and educating people about health matters. But only if the said advice and treatments are backed up by good objective evidence showing to some degree of confidence that they actually work and are safe.

Unfortunately that is hardly the case with this site. Casimero has guzzled the whole pitcher of Kool Aid. He's not just knee-deep in quackery. He pretty much eats, breathes, and lives it. He doesn't believe in "western doctors" anymore. He stopped vaccinating his children because he "found out that the whole vaccination theory and paradigm was completely false." He and his wife give chiropractic for heart ailments a thumbs up. He's been through colonics. He worships such sultans of nostrum as Hulda Clark, Andreas Moritz, and Bruce Fife. He avers that "'wholistic' healers are correct" while "pharmaceutical and surgical dominant medical superstition is absolutely false." In other words conventional medicine is bunk; it's the quacks with their snake oil who are the real doctors with real cures. (About Cure Manual, About Me)

Firstly, who's "they"? A list of names of those who made and make the claim would be helpful. Dr. Harriet Hall has an illuminating article explaining who's treating symptoms and who's actually ferreting out the real cause and treating it.

The wonderful thing about such sweeping claims as Casimero's is that we need only provide one disconfirming instance and the claim gets debunked. In logic the classic example is: All swans are white. If we find a swan of a different color, we instantly refute the claim. So does conventional medicine have zero cures for all diseases? When was the last time you had a bacterial infection that didn't go away or couldn't have gone away on its own? Were you prescribed antibiotics? Did the antibiotic just target the symptoms such as fever, diarrhea, etc. or did it rid you of the infection? Ever since the discovery of penicillin, millions of people have been routinely cured of a host of bacterial infections. They've proven so good in fact that we have forced artificial selection on pathogenic bacteria, thus leading to the problem of antibiotic-resistant strains flourishing. So there, Casimero's claim falsified.

But bacterial infection is hardly the only condition "western medicine" is able to address. There are a host of conditions that it can treat and cure. Herniated vertebral discs which cause nerves to be pinched leading to pain in the limbs are routinely surgically remedied. If doctors merely drowned the patient with NSAIDs and other pain relievers, that would be treating only the symptom. But if the pain is caused by a herniated disc then treating the spinal problem would be going right to the cause. Casimero's claim is dealt another blow.

And what about parasitic infestation such as ameobiasis and tapeworms? What do drugs such as metronidazole, paromomycin, and niclosamide do? They rid us of the parasites. Now is that treating the symptoms or the cause? Yet another machete strike. Do we have go on hacking and mincing this mythical horse?

Ok, just one last chop. Over five years ago my brother-in-law just suddenly collapsed in a mall. Tests revealed he had colon cancer. He underwent surgery. Part of his colon was removed. Annual check ups thus far show he's cancer-free.

Perhaps Casimero can enlighten us as to what the cause of death of various deceased alternative medicine practitioners have been. What can he say of those who succumbed to diseases? For instance, what, may we ask, did Hulda Clark die of? Clark whose books include The Cure For All Cancers and The Cure For All Diseases endured a series of ailments that even she could not address, thus leading her to (occasionally) turn to, gasp!, conventional medicine--pain relievers and hip replacement. "She suffered more than she should have because she wanted to solve her problems herself." Implied is that she couldn't and wasn't able to. The guru who had all the cures couldn't cure herself. In the end she apparently died from a form of cancer. Oh, the irony.

Here's Casimero's cure for all incurable diseases. I guess Hulda Clark failed to read Casimero. If only she had been on the "right diet," had not "polluted" herself, "cleansed" and detoxified her organs, "nurtured" herself, had taken nothing but raw foods and drank not water but coconut juice, used no toiletries of any sort, she never would have had any disease whatsoever and any disease she contracted would've left her in a zippy. So fear not malaria or dengue or hemophilia or sickle cell anemia or glaucoma or ... so long as you follow Casimero's recommendations. Remember, as with Clark he has written the definitive Cure Manual for All Diseases.


One of the things I've experienced with some religious sites and blogs is that they moderate comments. They probably want to screen out spam, ad hominems, crank messages, and the like. But I found to my chagrin that besides these obvious annoyances, some of these sites never allowed my comments to be posted. No, my remarks did not contain flames or insults or gratuitous derision. They were on-topic rational critiques. Which of course leads me to believe that these sites and blogs are afraid of analyses, facts and the truth. Perhaps because allowing dissenting views and informed criticism would open the door to questioning and disillusionment. They want their readers shrouded from reality, doubt, logic even. Thus, any views or facts for that matter that rock the boat will not be permitted to appear on their site.

Well I've had the same experience with Casimero. He too has blocked what I posted on his beam ray machine article. I've learned my lesson from sites that trash my comments so I now keep a copy on my computer, at least until the comment is posted. Here's what I wrote on Casimero's page:

1. The mechanism by which the beam ray is said to work has not been determined to be true. There is no good scientific evidence that various "frequencies" can detect/treat illnesses such as internal infections/infestation.

3. A good number of sellers of "beam ray" devices have been convicted of fraud and other felonies. Some beam ray devices have been linked to various deaths. http://en.wikipedia.org/wiki/Royal_Rife#Modern_revival.2C_marketing.2C_and_health_fraud.

4. Hulda Clark's claim that all diseases are caused by parasites has no basis in reality. Her "zapper" machines are bogus. Clark has run afoul with both the US and Mexican government for issues related to her practice of medicine. She is not licensed to treat people. (http://en.wikipedia.org/wiki/Hulda_Clark)

Instead of publishing the above, he emailed me. Seriously, I appreciate that he did. It shows he does in some way care about the matters I raised. In his missive (which I won't copy and paste, having no permission to do so), he acknowledges my "healthy skepticism" and provides a series of positive personal anecdotes which he uses to justify his belief in the beam ray machine he's been exposed to and Hulda Clark's zapper which he purports helped save his brother's life. In answer to my statement that no RCT has been conducted to evince the efficacy of beam ray machines, he told me to finance a study myself, adding that I'll need half a billion to a billion dollars for it. I'll presume he isn't ignorant and was merely in a hyperbolic mood since even the NCCAM gets only a billion to fund a whole range of CAM studies.

I replied informing Casimero of the post hoc ergo propter hoc fallacy and how factors such as the placebo effect, natural history of diseases, regression to mean can mess up causal inferences vis-a-vis treatments. I also asked him whether he allows rational critiques on his site and if not, why? That question must've been a show stopper since I have yet to hear from him. I'm afraid that as with the religious sites I allude to above, Casimero will not allow anyone to rock his boat, lest the truth be let out of the bag and infect the minds of his readers, and perhaps family members as well. Could it be that his cure-all regimen might prove ineffective against critical thinking? And maybe, just maybe, he harbors the fear that he could be terribly wrong about CAM.

Finally, just for entertainment, here's how Casimero's site rates on the Quackometer (click for the larger image): 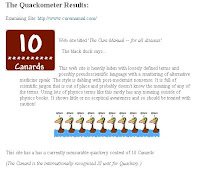 It's unfair that you decided to single out for a reason Edwin Casimero. He is a staunch supporter of that school of thought according to which the causes of most of the ailments that befell us are linked with the defectuous way in which most of us nourish ourselves. Hence his plea for raw, fruitarianism etc. You could not have failed to notice that he is a staunch enemy of junk food. The truth is that most what Casimero claims makes sense... True, his is an intuitionist, non-conventional approach that spits in the face of the establishment. But sooner or later, most of his daring theories prove to be right. I am not sure that "cancer is a fungus" (as he claims), perhaps it is up to a certain point, yet according to a recent New Scientist article, Alzheimer is a form of diabetes caused by the flawed way we feed ourselves (well, at least most of us) too much sugar and carbs, gluten and bad quality highly processed saturated oils...

A large body of evidence now suggests that Alzheimer's is primarily a metabolic disease. Some scientists have gone so far as to rename it: they call it type 3 diabetes