Ark sighted in the Netherlands 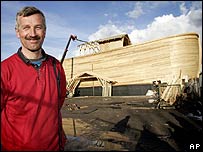 Banks actually loaned this guy a million dollars to build the Ark. His profit projections must've been quite persuasive.

Dutchman Johan Huibers is building a working replica of Noah's Ark as a testament to his Christian faith. The 47-year-old from Schagen, 45km (30 miles) north of Amsterdam, plans to set sail in September through the interior waters of the Netherlands.... Johan's Ark is a fifth of the size of Noah's and will carry farmyard animals.... Although Mr Huibers has tried to remain true to the ark described in the Bible, Johan's Ark is constructed with American cedar and Norwegian pine, rather than "gopher wood".... [Huibers] said he plans to stock his ark with horses, lambs, chickens and rabbits - mostly baby animals to save space.

Huiber's Ark will be 20% the size, will not be made of the same material, will carry only a few species of domesticated animals, and won't be stocked with provisions and out at rough seas for more than a year. So how is it in fact anywhere close to being like Noah's Ark?!

Hey Johan, how about setting sail for Florida and parking your boat in Disneyland? Just a friendly pilot's tip: Make sure the sweet smell of freshly sacrificed lambs reaches your Supremo as you're crossing the Bermuda Triangle. Wouldn't want you to end up a Flying Dutchman, would we?
Posted by Edwardson at 2:46 PM