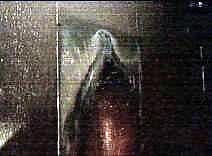 A woman in Maine found the above image of the Virgin Mary on a wall of her burnt home. And I thought it was Little Red Riding Hood. My bad.

[Veronica] Dennis' home caught fire Sunday morning after a space heater in her daughter's bedroom ignited a bed and a nearby dog bed. The image was revealed when she removed a framed painting from the kitchen wall, which was blackened by smoke and fire.

So that's where she's been hiding all this time. Had to take a fire to smoke her out, huh. Dennis' neighbor Marlene Gile--now turned prophet--declared that

viewing the image led her to believe that it could be [a] message from a higher being.

PS. Now the soot on the wall looks to me like a teepee with a cooking/heating fire going inside, or a volcano with ash spewing off its top, or ...
Posted by Edwardson at 12:01 PM

Funny, I thought it was Cecil the sea serpent in a bad mood. Where's Beanie?

I like that painting ... in an odd kind of way. Had it as my wallpaper for a week. Ze goot doctor sez I am nyoorotic.