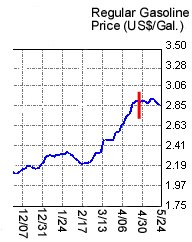 From the graph it looks like gas prices in the US have been climbing. And it looks like God's having a hell of a time negotiating with the cartel to boost their production or whatever it is that's going to bring down crude prices. As Randi tells us it's been over a month since Christians started praying for lower pump prices (see red bar in the graph). Guess the thousands of petitions aren't making a dent.

Ah! But look. It's plateauing. God's got it under control. For an almighty, all-powerful, perfect creator who transcends time and space he sure doesn't work like one.

So how in fact can we know whether prayer works or not?

If religionists pray for B and B happens how do we know that the occurence of praying and B weren't just coincidental? If yesterday farmer Pedro prostrated himself and beseeched God to flood his encrusted rice paddy so that he may have a harvest to feed his wife and 12 children, and if it's raining outside right now, how do we know whether his deity had caused the downpour or whether it's been brought about by the monsoons (well, June is the start of the wet season you know)?

On the other hand, if these supernaturalists pray for B and B does not occur and because of such failure they churn out ad hoc explanations such as "God sometimes answers yes, sometimes no," "God works in mysterious ways," or "God knows best and this is his will," how do we know these explanations are true? How do we test their veracity? Pointing to an ancient text only passes the buck to ancient writers and pointing to their ministers, priests, bishops, popes ... just passes the buck to the living deluded. Such fallacious arguments may strengthen these believers' belief, they may give us info on how many believe and how long the belief has been around, and they may tell us how ignorant the believers are of logical fallacies and epistemology, but they do nothing to suppport the case for prayer.

If prayer is not or cannot be subjected to objective testing, if non causa pro causa / post hoc ergo propter hoc fallacies cannot be ruled out when prayer apparently works, and if nontestable/nonfalsifiable ad hoc rationalizations are resorted to when prayer apparently fails, then how can prayer ever be known to work? Mere belief (faith) in the power of prayer cannot in any epistemologically valid way lead us to the conclusion that it works. Cherry-picking cases that confirm the belief and ignoring those that contradict/refute them, on the other hand, is subjective validation and selection bias (and outright cheating--either cheating themselves or duping others as well).

If there is no way of objectively testing, verifying, and knowing if prayer is indeed efficacious then those who claim that it works are guilty of ignorance, bias, or prejudgement. It is extremely pitiable. And it is so because such a belief (meme) is passed down to their progeny. It is the children's intellectual future that I care about. I have no regard for adults past 30 who still literalize mythology. It is their progeny and their descendants that I care about. It breaks my heart to see and hear parents telling their children not to forget to say their prayers, to be good because YahooJuju up above is watching them, that grandma is now living with Him. Lies! How do they know any of these is true?!

We teach our children to be honest. But we break this rule every time we imply by our example and by our imperatives that prayer works. When we pray and when we tell them to say their nightly prayers we lie to them. My own brothers lie to their children, Christians lie to their children and grandchildren. If we are going to be honest with those who inherit our genes then there is only one lesson we can pass on about supernaturalism: We don't know if it is true. We don't know if deities exist. We don't know if prayer works. There simply is no good, compelling evidence for any of these. We may believe but we don't know if any of these things we believe in are true. And that my sons and daughters is the truth.

So Christians are liars. Whether it is Eli Soriano, Pat "one ton leg presser" Robertson, Manalo, Ratzinger, ... --they're all liars. Not one of them has incontrovertible evidence for their theological claims, nor do they provide the methods for testing the same, tests which would provide us intersubjectively verifiable results. They claim to know when they in fact don't.
Posted by Edwardson at 11:00 PM