Kicking out this fatty

Shortening is a fat that's made from vegetable oil. Why convert oil to shortening? Because then it becomes solid at room temperature and gains a longer shelf life. A lot of margarines are in fact a form of shortening with added flavors and color. The way to transform vegetable oil into shortening is through hydrogenation whereby hydrogen atoms are added to the oil molecules in the presence of catalysts. The more hydrogenated an oil is the more solid it becomes.

For some time now I've been hearing that trans fatty acids (TFA) are really bad. You could say that within the axis of evil, trans fat is the mother of all bad cholesterol. [1]

Replacing only 2 percent of calories from trans fat with a non-trans unsaturated fat cuts the risk of heart disease by more than half, according to Harvard researchers. They found that cutting trans fats—far more than cutting saturated or total fat—is the best way to lower the risk of heart attack and strokes.

What has TFA got to do with shortening and margarine? Well, partial hydrogenation--which has been the most common process--creates trans fatty acids. (Curiously, full hydrogenation renders the product TFA-free.)

Given its notoriety there are those who'd like to ban or have already banned trans fats.

Americans don't take lightly to bans, as illustrated by the ridicule thrown at New York City's plan to eliminate trans fats from its 20,000 restaurants, announced Sept. 26. The typical cries went up about infringement of personal liberties and the rise of food Nazis.

Trans fats are now universally vilified by health experts. Denmark outright banned the fat in 2003, meaning no trans fat in the Danish danish. The European Union is mulling a similar ban.

Banning fats? How long has shortening been around? Oh, about a century.[2] Not that age matters at all. But I for one would rather see a transitional period. Go on an educational blitz to scare the hell out of consumers and brainwash them. That should naturally motivate restaurants and food manufacturers to switch to non trans fats and advertize their products as such. After some years make it illegal, since who are we kidding? Not all of them will go for more expensive options (assuming substitutes don't become cheaper).

I'm not familiar with other foods, but I have a little working knowledge of breads. Have you taken at look at the list of ingredients for your loaf lately? Only occasionally in my case. Unless you're some purist who sticks only to rustic breads that've been made with nothing except flour, salt, water, and yeast (and bacteria), you're probably taking in an amount of shortening or margarine in every slice and morsel. Given that trans fats are the baddest of them fats and oils, as consumers who purchase bread regularly and who do want to reduce health risks as much as we can, there is reason to clamor for TFA-free baked goodies (just as diabetics can now have desserts and cakes made with sweeteners such as Splenda).

Can we make good bread sans trans fat? No question about it. Good, flavorful breads (the so called "enriched" types, as opposed to the "lean" ones) are made with butter. But butter is expensive and so a good number of mass-produced loaves out there, those that are soft and easy on the jaws, are made with shortening. The amount incorporated varies, but as per the formulas I received from a baking engineer it falls in the range of 3 to 6%. [3] All fats/oils tenderize bread by coating the dough's gluten strands (gluten is a protein that makes dough elastic and is what allows the dough to trap the carbon dioxide produced by the yeast during fermentation). However, according to Johnson and Wales University baking instructor Peter Reinhart, shortening "gives the softest texture." [4] Given the different forte of various oils and fats I wouldn't be surprised if a combination of them were used in a loaf. I myself have experimented with a butter and margarine/shortening combo to try and get the best of two worlds. Although, margarine and shortening are cheaper, they don't melt at around body temperature nor do they come close to the aroma and flavor of butter (shortening is tasteless and pretty solid even at 30 degrees Celsius).

As Reinhart says if you want flavor use butter. But if you want to reduce your saturated fat intake as well--as the American Heart Association suggests--then go for unsaturated oils. Breads such as focaccia and even pizza crust (some types at least) are made with olive oil which is mostly a mix of mono-unsaturated and poly-unsaturated. Other options to reduce bad fat intake? Director of the Baking Education Center of King Arthur's Flour Co. Jeffrey Hamelman has this suggestion: "For those who prefer to eat less butter, my advice is not to alter the proportioned formulas, but instead to have a thinner slice of the product." [5] Ah yes. Diet, diet, diet.

The good news is there are already fats out that are TFA-free. Crisco for example has its fully hydrogentated shortening. Margarines meanwhile are all over the map. There should be variants out there that are very low in TFA (but I really wonder how much trans fat there is in every spoon of Star margarine). Hopefully as demand and production volume picks up prices start going down. As to how they affect the product and perform in the pan and in the oven, I have no idea.

As cities and countries around the world begin cracking down on TFA it makes you wonder if saturated fat will ever be on the chopping block. That'll be the day when butter becomes illegal.

There's this quacky doc of my mom who interminably gets on my nerves. Among his inanities is that he says no to all fats and oils and railroads all of them, simplistically declaring, "fat is fat." I ask him about whether unsaturated and polyunsaturated would be better for frying, and he just whips out this slogan of his. Arrgghh! Well, there certainly are MDs who distinguish between good and bad fats. And this diabetologist is supposed to be a medical awardee or something?


3. Based on baker's percentage.

The baker's percentage is an efficient and convenient method of expressing a formula (recipe). (I now shudder whenever I see a recipe expressed in cups and teaspoons!) Flour always totals 100% (yes, there are times when two or more types of flours are used). The amount of every other ingredient is a percentage of the flour weight.

Example: Given the formula below, let's say we want to end up with a final dough weight of 2000 grams. We first compute for the flour weight. That's simply the dough weight divided by the total percentage: 2000 g. / 170.7 % = 1171.6 g, which we round up to 1172 g. To get the weights of the other ingredients simply multiply their percentages by the flour weight. Thus, the amount of shortening required is 1172 g. x 4.0 % = 46.88 g. The combined weight of all the ingredients should equal your desired dough weight.


By the way, the above formula is fictitious, even as it'll produce edible bread. That's the beauty of using baker's percentage. You can at a glance instantly see if the recipe is workable or not.


5. Jeffrey Hamelman, Bread: A Baker's Book of Techniques and Recipes, Hoboken, NJ: John Wiley & Sons, 2004, p. 60. A most excellent book, I should say. The science and techniques sections are the ones I love most.

And here are some goodies I made this week using Hamelman's Soft Butter Rolls formula. Oh yes, this definitely has baaad fats. Not only does it have butter in the dough but in the crust as well--instruction calls for brushing it with melted butter before and after baking. 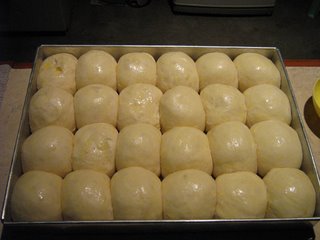 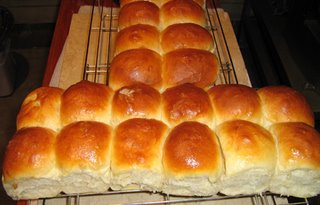 Rolls on the cooling rack. Had to slice the rectangle of rolls since my cooling racks just aren't large enough. 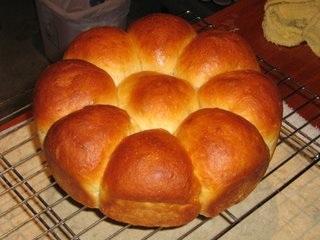