In the second chapter of Flim-Flam! James Randi convincingly shows how the fairies in the early 20th century photos taken by two girls were merely paper cutouts from some publication. It really is a pity that the creator of Sherlock Holmes had been taken in by the pranks of children.

Be that as it may it now looks as if Randi will have admit that fairies aren't fiction and myth at all (not that he'd have to part with his million dollars just yet). Archeology has just provided us with incontrovertible evidence that fairies do exist. Rocks don't lie. The following fossil record finally vindicates Sir Arthur Conan Doyle's childish faith in flying nymphs. 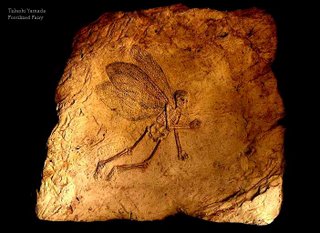 (via Pharyngula)
Posted by Edwardson at 10:25 AM