Ever seen a tree taking a leak? 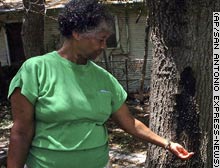 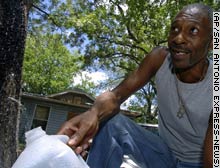 Lucille Pope's red oak tree has gurgled water for about three months, and experts can't seem to get to the root of the problem....

[The Texas Forest Service] have taken pictures and conducted studies, but none have arrived at a firm answer.

Lucille Pope has started to wonder if the water has special properties.

Her insurance agent dabbed drops of the water on a spider bite and the welt went away, she said.

"I just want to know if it is a healing tree or blessed water," she said. "That's God's water. Nobody knows but God."

My advice to the Popes: Beware of AntiJeebus products! Buy genuine healing water only from Vatican-certified outlets nearest you. And maket sure it has the Turin Shroud Hologram™ seal.

As for the leaking tree, Mark Peterson of the Texas Forest Service mused that, "If it is a burst pipe their monthly bill would be enormous." That brought to mind a recent "mysterious" experience of mine.

A couple of weeks ago the water company finally connected our line to the new mains they buried along the road. (You should see the mess they made along the entire stretch of the street.) A few days later after water service was back we noticed that the little vane inside the water meter was spinning like crazy. Water was coursing at something like four gallons a minute. That's like having several faucets on our premises open at the same time. And yet every valve we had around was shut. Of course, on the top of my list of guesses was a burst pipe. And yet the man from the company that's in charge of the project for the water company told us we needed to install a check valve. Duh?! I told him we don't have an overhead water tank. How do you get a backflow, and at that dizzying rate?

To cut to the chase, I finally surmised that one of the underground branches (they're all 3/4-inch galvanized iron pipes) must've burst and was dumping water (ergo, lots of money!) right under our driveway. The current water pressure must be greater than it was previous to the rehabilation of the mains such that this section of our 20-year old pipes--probably rusted through pretty badly--just couldn't take it anymore. Cutting off supply to that section immediately solved the problem (had to saw off an elbow and cap the supply pipe) .

In the aftermath two things still baffle me: 1. There wasn't and isn't any telltale sign anywhere on the premises that there was a leak--and I estimate that about 100 cubic meters of water have already been dumped. 2. The soil beneath had presented practically no resistance to the water flow. Now I'm wondering how much erosion has taken place under the concrete driveway. Is it practically hollow under it? Would a fully loaded truck passing over crack it, notwithstanding the steel rebars used to strengthen it?
Posted by Edwardson at 10:30 AM