Don't ever call him dumbo again

It may be too early to celebrate, but I am so thrilled that it looks like we're finding more evidence of mammals possessing cognitive abilities we thought were exclusive to humans. 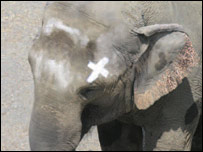 Elephants can recognise their own reflection, showing self-awareness seen before only in humans, great apes and bottlenose dolphins, scientists say. US researchers made the discovery by studying the behaviour of Asian elephants in front of a tall mirror. One of the animals repeatedly touched a white cross painted on her forehead - a classic test used to assess mirror self-recognition in children and apes.... The mark could only be seen in the mirror, and the elephant ignored another mark made with colourless paint that was also on her forehead to ensure she was not merely reacting to a smell or feeling. While only one elephant passed the mark-touching test, the researchers note that fewer than half of chimpanzees tested typically pass this test.

I don't know about all the wrinkles in these sorts of tests, but I'm giddy with anticipation for the results of later tests.

Hey, think about it. Animals often have clearer concepts of their place and role than humans do. What arrogance to think that humans are always better!